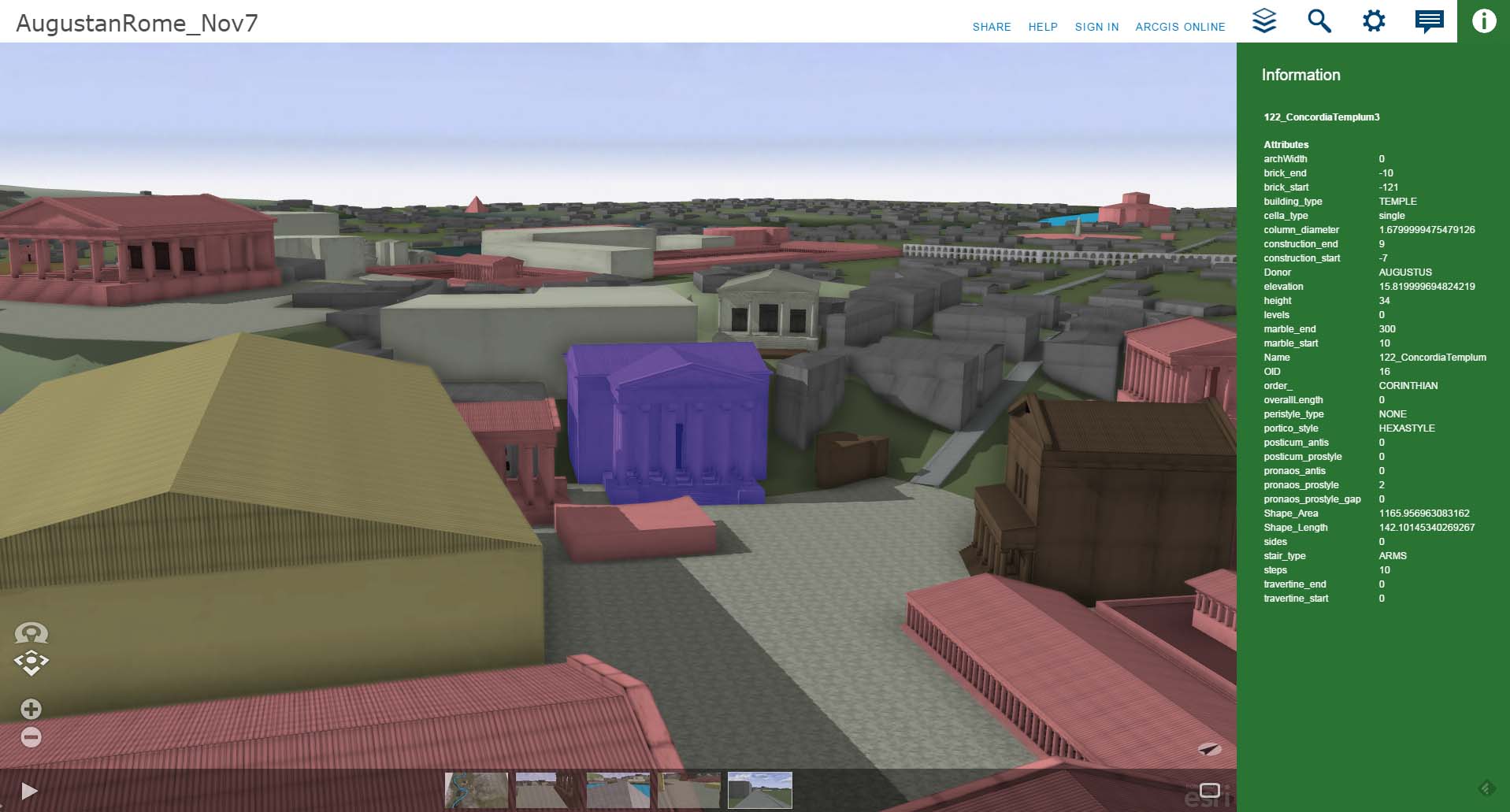 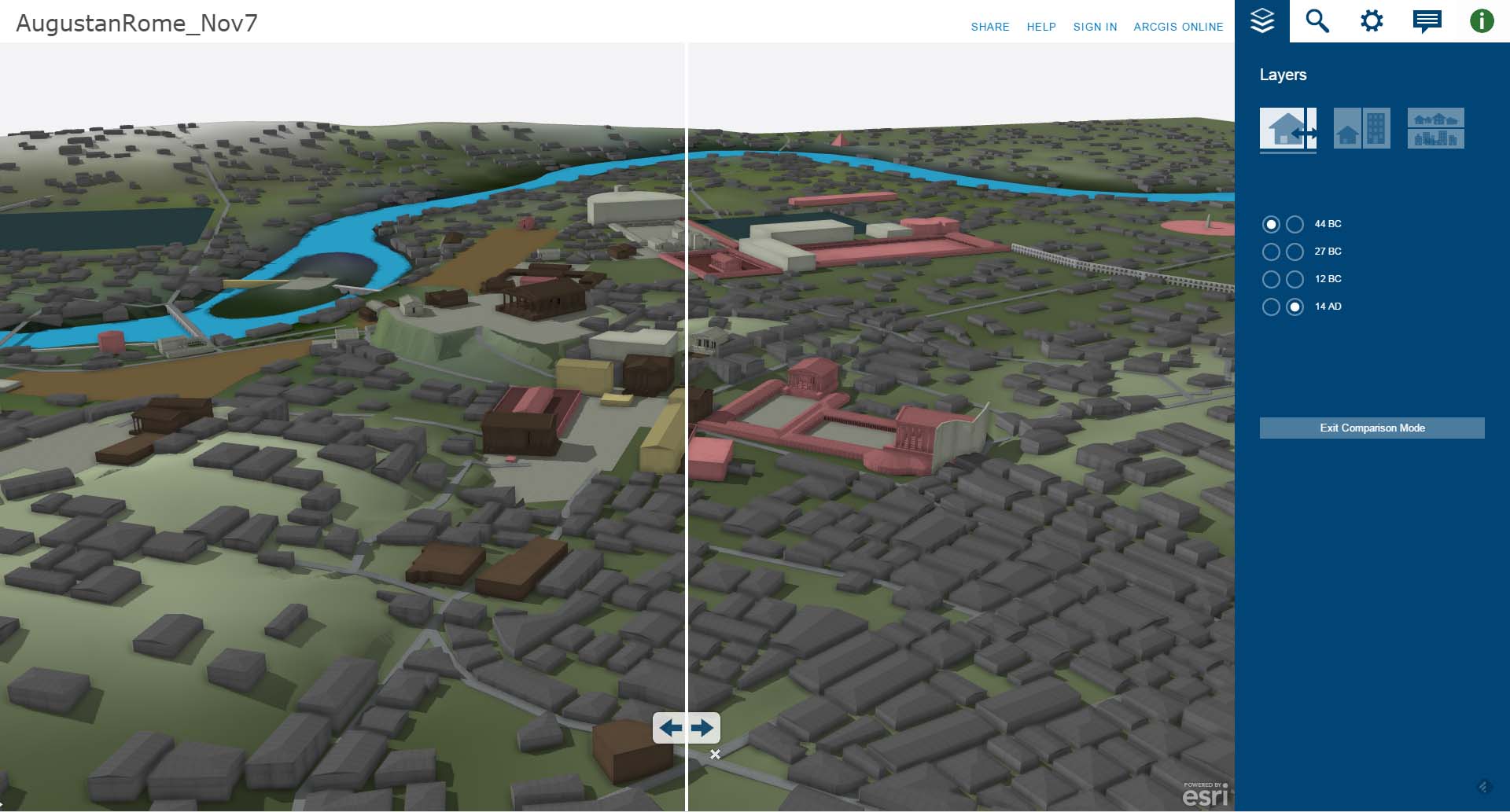 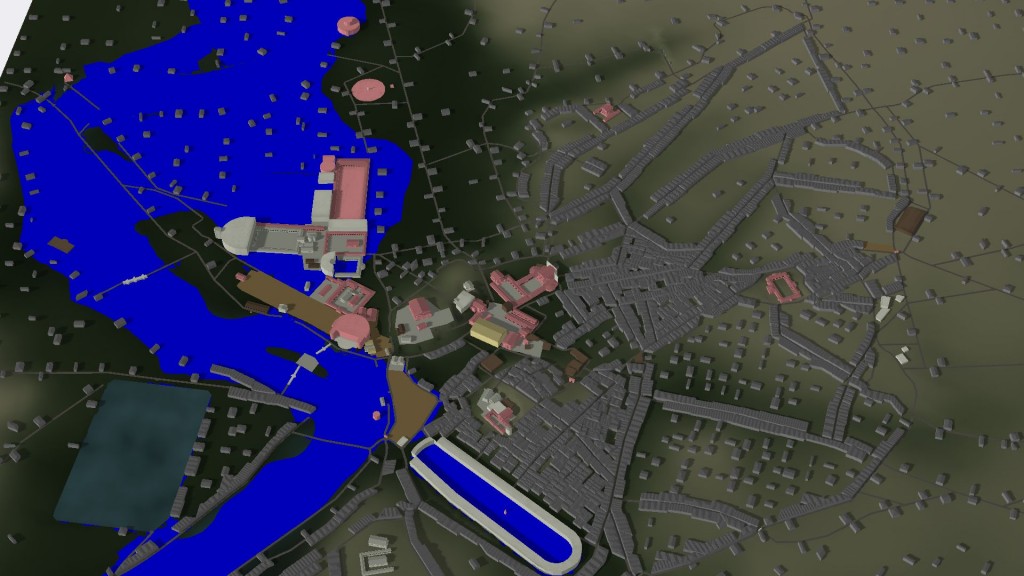 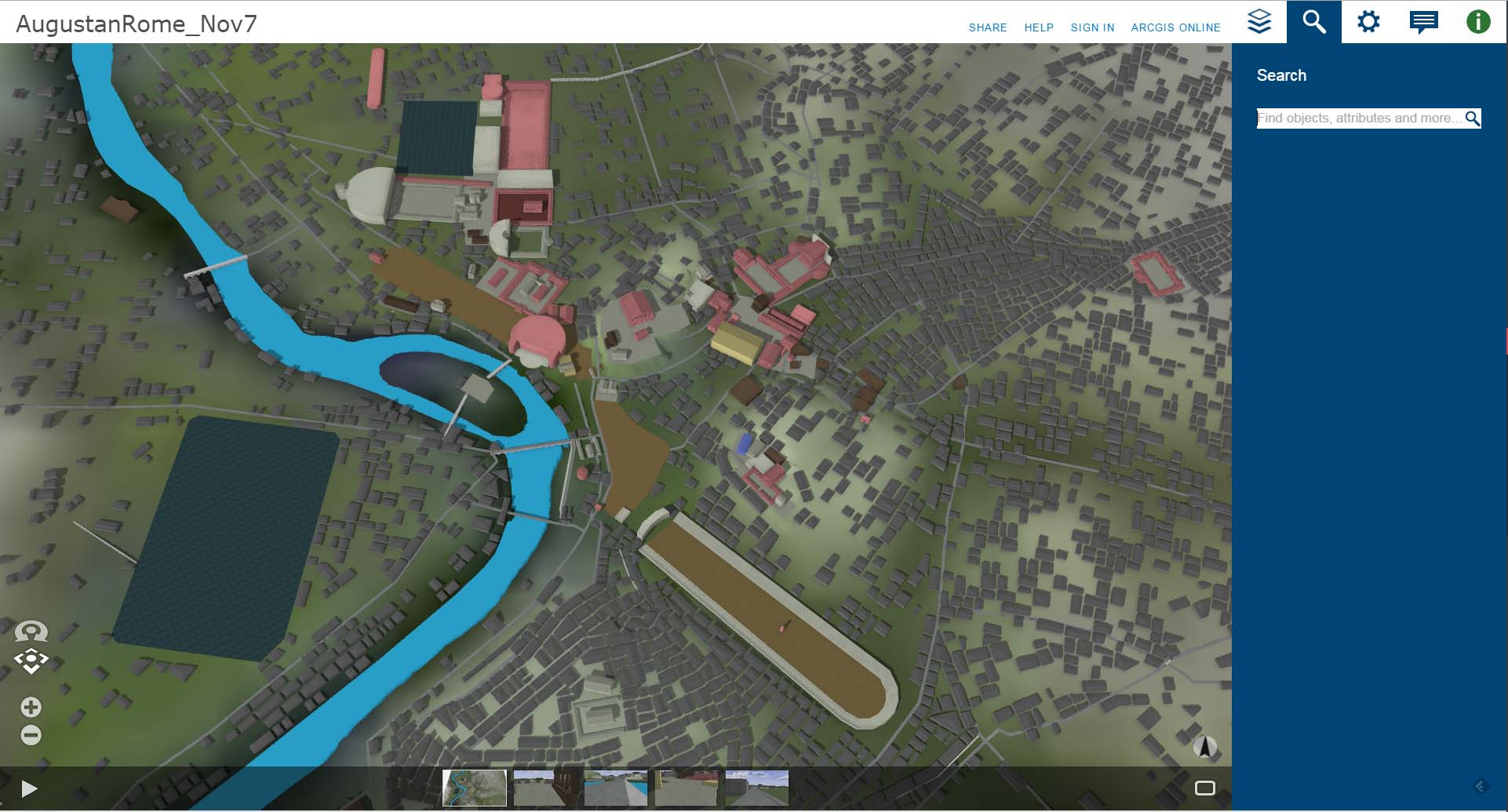 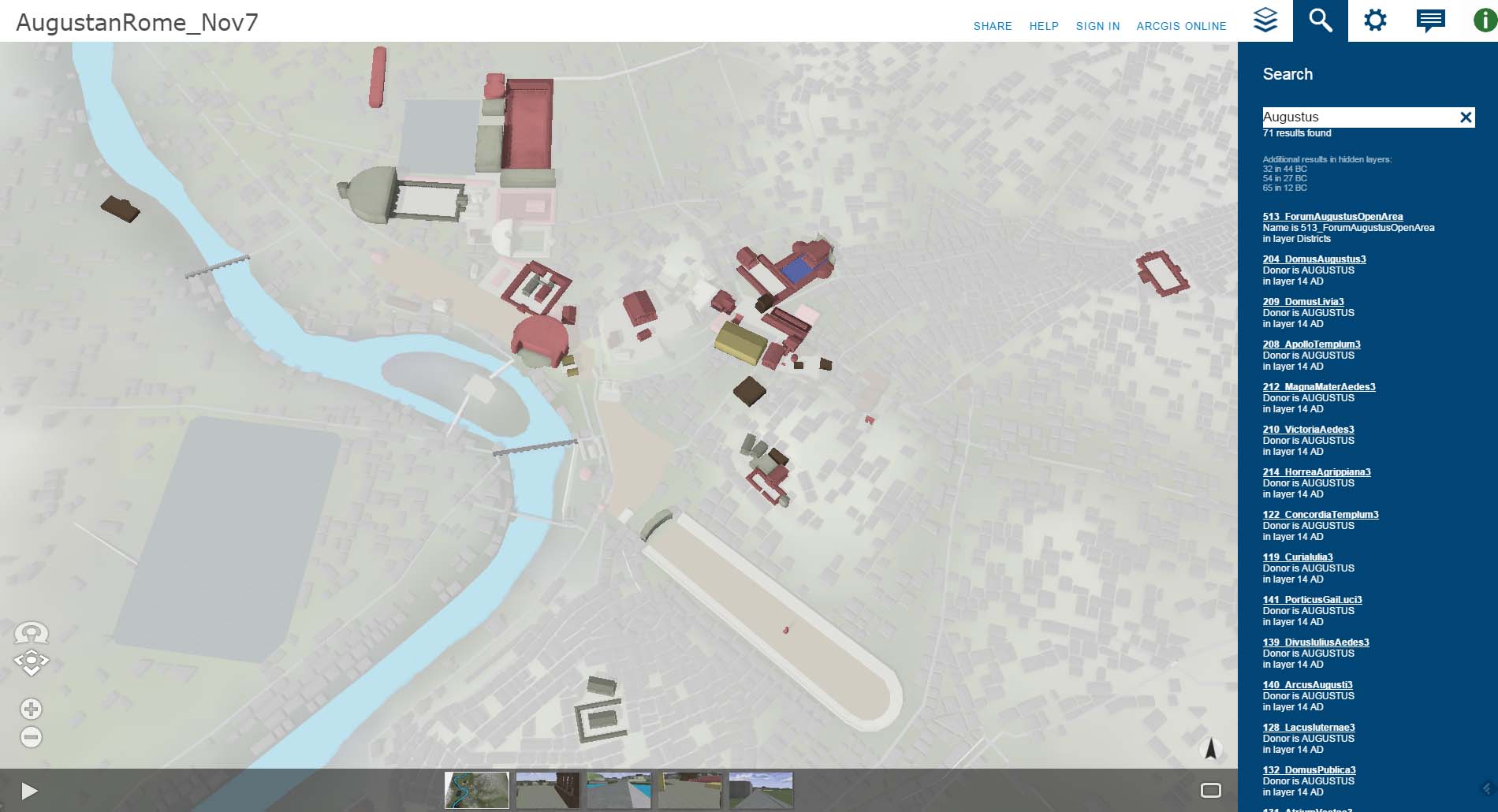 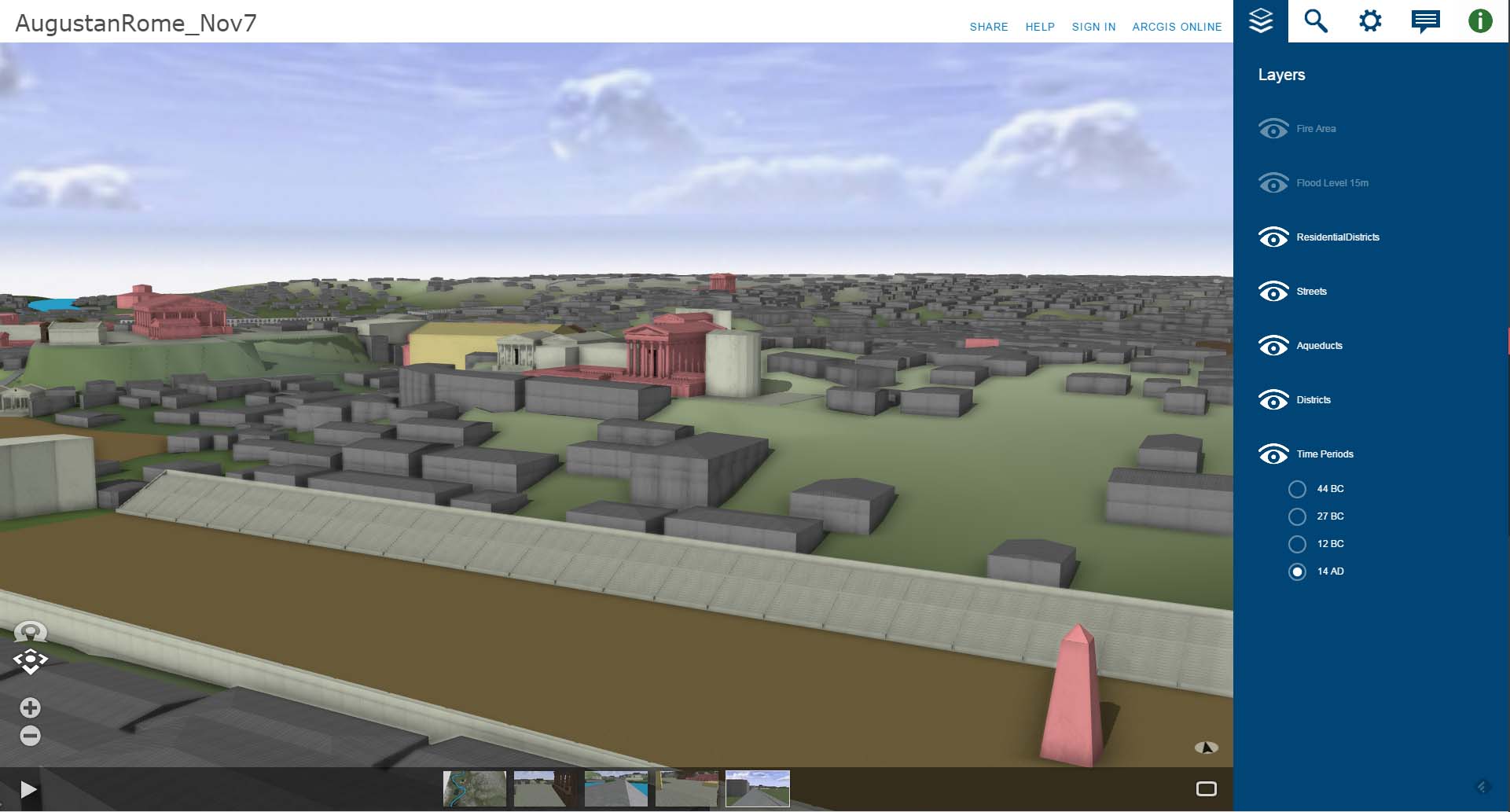 Website: The most recent version of the project can be viewed here

The first Roman Emperor, Augustus, allegedly claimed to have transformed Rome from brick to marble.  Explorations of this statement have previously examined literary sources, archaeological evidence, and two-dimensional maps.  A team from UCLA is reverse engineering the ancient capital using an integrated software platform for procedural modeling to evaluate the boast in four-dimensions. A methodology more than a technology, procedural modeling requires the textual expression of decision-making based on semantic rules that emphasize part-to-whole relationships. Once articulated, the set of coded attributes and parameters inform the nimble generation of an entire cityscape. For the Augustan Rome Project, the team is collating data on over 400 known early-imperial structures, and consulting diverse ancient materials to inform the generation of over 9000 infill buildings.  The data informs the articulation of rules and parameters that in turn result in the generation and regeneration of alternative versions of the ancient city. Structures are not rendered realistically, but take the form of massing models color-coded by building material and period of construction. These are situated within an interactive, geo-temporal topographic model of Rome where they can be examined at different periods and scales, under different lighting conditions, by type and other factors. A click on a specific building model links to its underlying data. Researchers can also post comments directly on the model, in effect “footnoting” the buildings and urban spaces. The resulting simulations of multiple “Augustan Romes” are useful visualizations that facilitate the assessment of building and material distributions, viewsheds, constructionscapes, and urban circulation routes in time and space. Interrogation of the models reveals that despite the evidence from depictions in artworks and literature, Augustan marble projects did not standout in the skyline or cityscape, even under optimum lighting conditions. Instead, interaction with marble was up close, personal, and continuous. Monuments remained under construction for decades, or required rebuilding after floods, fires, and other disasters, with piles of building materials staged at the city’s edges and building sites. Many new projects addressed pedestrians who encountered expansive areas of finely-joined marble pavers and a proliferation of porticos with marble embellishments on any walk through Augustan Rome. In addition, processions of large stone pieces such as increasingly popular monolithic columns, and large construction machinery frequently disrupted urban traffic. Simultaneously, clouds of marble dust from joining and finishing stones on building sites ensured that marble was ever in the minds, and eyes, of residents.